As the last, empty box of chocolates goes into the (recycling) bin and the famous January Blue Monday slopes into view after the Season of Goodwill, it can often bring with it its unwelcome extra baggage: regrets!

Many of us attempt to remedy this through some timely New Year’s Resolutions that tend to revolve around the following aims:

Yet 80% of such resolutions are reported to have failed by February; maybe regrets isn’t the best of motivators! According to Business Insider, the logic lies in leaving the guilt to one side and instead making some positive decisions about how the coming year will look, in a measurable way. For example, turning the generic goal of ‘wanting to exercise more’ into a time-sensitive plan to run a 5k by June.

It’s not too much of a muscle-worrying stretch to say that across the world, many businesses are finding something similar in terms of data quality operations. A 2017 Forbes article stated that:

“…84% of CEOs were concerned about the quality of the data they are basing their decisions on.”

Banks’ core systems are famously aged, making them prime candidates for causing worry and concern about the data they hold, and the impacts it can have on business performance and customer satisfaction. But rather than wait and regret, banks too need proactive and measurable plans for data users across the business to build step-changes in their business capabilities and meet regulatory requirements.

Over the next few weeks and based on our experience with our clients in 2017, we’ll take a look at some comparable, achievable goals for data users, heads of department and regulatory reporting functions.

Part One will be to expand on I need to exercise more and turn it into I need my data ready to deliver business improvements – by the summer! 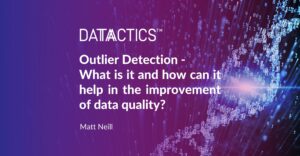 Outlier Detection – What Is It And How Can It Help In The Improvements Of Data Quality?

Identifying outliers and errors in data is an important but time-consuming task. Depending on the context and domain, errors can be impactful in a variety