“I just can’t rely on the data being good enough”… it’s so often the cry of the frustrated business user.

Nobody is doubting the ambitions of business teams when it comes to doing more with their data, but being hampered by duplication, inconsistencies and gaps really takes the wind out of their sails.

Is it any wonder, when in a 2017 study Deloitte reported that 92% of financial institutions relied on faulty information to better understand their customers? At a cost of nearly $15m annually per firm, as reported by Gartner, poor quality data is a major drag to their progress.

In this blog post, we’re going to give those data people some hope, from the other side of successfully implementing a data quality improvement plan, with three unexpected benefits of being able to trust in your data.

Hint: it’s all about your people; so our unexpected benefits are going to major on your data people, showcasing these benefits from a human perspective.

McKinsey reported that over half a million days of managers’ time is potentially wasted when people can’t make decisions quickly and efficiently. No doubt, in these data-driven times, that this is in no small part down to the data they have at their disposal.

There are three factors behind something called “agency” – the ability to make decisions, have all the resources at your disposal to do a good job, and feel competent in your role – which is recognised as being one of the most effective drivers of productivity. But perhaps just as importantly, it makes people feel good at their job. Being able to trust in data improves morale for that much-needed analytics programme, the efficiency-delivering AI project, or for customer services teams operating on the front lines.

As we’re focusing on your people, let’s delve deeper into ‘self-help for your data people’ by looking at our second benefit: de-stressing your data stewards

Sometimes the type of data, what it represents, and simply how untidy it is, causes a lot of stress. The stat from Forbes in 2016 about 80% of data scientists’ time is spent doing something that nearly the same percentage find unfulfilling is a major worry for having effective people working effectively.

If the data was clean, they wouldn’t be wading through duplicates. If it was in order, they could for example use their skills in building models based on sentiment analysis instead of having to manually extract sentiment from poorly maintained datasets.

The poor data janitor will have to trawl through others’ misery and trying to pull all the conclusions together before the next reporting period is due. Get the data sorted, and those data people can put their clever brains into making a difference instead.

And then they won’t want to leave you, which leads us nicely on a related note to our third unexpected benefit: retaining good people.

Data scientists are hard to come by, and good data scientists even more so. That’s before you consider the cost of replacing them, which for roles that average upwards of $120k can be well over the 33% listed by Forbes.

Trusted data gives them a major reason to stick with your company and not defect to the nearest competitor who, on the face of it, looks like they’re running the latest tech. Not every firm can simply snap their fingers and get the latest tech infrastructure in place, but with data scientists’ salaries and packages regularly approaching that of hardcore developers it’s clear that the work should go into retention rather than a revolving door of constant replacement.

We’ve been working with plenty of firms whose business goals definitely include dashboards, metrics, all the usual features of data quality and data governance. But we’ve found that culture is as much a driver and a beneficiary of having clean data. These unexpected benefits might not be what you’re thinking of when you’re embarking on a data programme, or even when you’re just trying to figure out how to make things better, but they’re definitely going to power your company’s approach to the data-driven future.

Maybe you’ve more unexpected benefits of cleaning data? You can book a 15 minute non-committal chat with Kieran Buchanan here, or by clicking the image below! He would be happy to chat through any questions, queries, or steps you wish to take. Bad Data can’t wait for IT; save time, reduce costs, increase profitability and reach out to Kieran today. 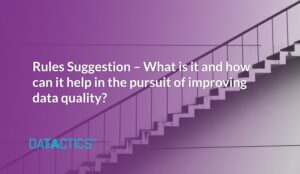 Rules Suggestion – What is it and how can it help in the pursuit of improving data quality?

What is Data Quality?

Data quality refers to how fit your data is for serving its intended purpose. Good quality data should be reliable, accurate and accessible. 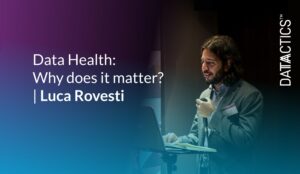 Data Health: Why does it matter? | Luca Rovesti

Introduction  Getting into shape is a big focus of summer advertising campaigns, where we’re all encouraged to eat, drink and do the right things to keep our