At the start of June, Marketing & Partnerships Manager, Matt Flenley was a panellist on an A-Team webinar on overcoming barriers to RegTech adoption alongside Sophia Bantanidis of Citi, Kayvan Alikhani of Compliance.ai, and Patrick Boscher of Pabora.io. With questions posed by Sarah Underwood, the webinar delved deep into views from different sides of the fence – buyers, sellers and investors – seeking to provide a broad understanding of the barriers each side faces and how to overcome them. Here, he focuses on a few of the biggest talking points raised by the webinar. From the moment the panellists began introducing themselves, I knew it was going to be pretty wide-ranging. Patrick Boscher is ex-Allianz Group, now RegTech advisor and Startup Angel; Sophia Bantanidis is a former regulator, now leading RegTech & Fintech innovation at Citi’s Innovation Lab; Kayvan Alikhani of Compliance.ai, a technologist who’s worked with hundreds of compliance officers; and then, of course, me – now at a Fintech/RegTech, but formerly in a bank and dealing with the sorts of problems that technology is rapidly solving.

A-Team Group usually gets a good panel together, full of opinions from across the sphere of a debate, and this was no different.

Sophia Bantanidis’s views reflected the need of a massive financial organisation to have RegTechs think big – how can my solution be deployed at an enterprise level to solve multiple problems for thousands of people, in hundreds of different countries? – and the counterpoint RegTech adoption view from Kayvan Alikhani was that banks should think in terms of specific problems they have right now that must be solved, even on a small scale.

Fundamentally, the most important thing emerging was that both sides – all sides, including investors – have a strong desire to make it work.

Innovation centres at banks are a superb way of getting a foot-in-the-door, and as Ms. Bantanidis said – they can act as a sponsor throughout the organization, a champion for the firm to gain a foothold and start to grow.

This willingness to support innovative tech firms flourishing in organisations is something the independent commentator Chris Skinner expanded upon in a session last year held by the FS Club on digitisation (and the focus of his most recent book); he asserted that much of the evolution necessary to fully benefit from the opportunities that RegTech promises requires a change in mindset within banking and finance, to become data-and-digital-first – and not simply parrot those statements without changing the underlying structure of banking.

Now, it would be too easy – not to mention wrong – for me to suggest that all we need for a banking and finance revolution is for the banks to evolve culturally!

Like partners in a relationship where perhaps different views on a point are held, we need a willingness to work things out together and some intelligent mediation along the way. The webinar’s conclusion really hit home on this, with some sage points of advice and compromise:

Next up for Datactics on the webinar front, we’ve Head of Sales Kieran Seaward in a Wealth Management special on “Future Proof Operating Models”, followed a week later by Head of AI, Dr Fiona Browne, exploring uses of AI in AML & Know Your Customer. I’ll share details of these in my LinkedIn feed, or follow the company one here. There is a lot of anticipation surrounding Artificial Intelligence (Al) and Machine Learning (ML) in the media. Alongside the anticipation is speculation – including many articles placing 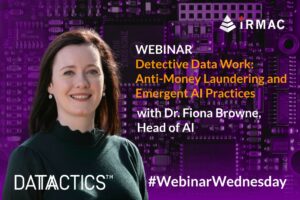 Earlier this month, our Head of AI, Dr. Fiona Browne took part in the IRMAC webinar ‘Detective Data Work’ and explored the AML and emergent 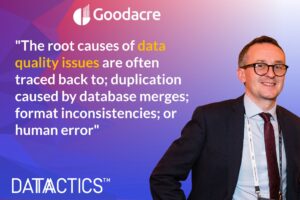 In early June, our Head of Sales, Kieran Seaward, presented a session on ‘Data Quality Management’ at the Goodacre’s conference: ‘Future-Proof Operating Models‘ Missed it?